Portland, M.E. – It was just a few short months ago that Portland Pirates players, staff, and fans unexpectedly had their American Hockey League team stripped from Portland, Maine, and relocated to Springfield, Massachusetts, leaving employees jobless, forcing athletes to change their offseason plans, and abandoning thousands of loyal fans.

While the rest of the hockey world has moved on, those closest to the former organization are having a tougher time leaving the memories of their team and city behind. For some athletes, this will be the first season in several years that they won’t be playing a game at Portland’s Cross Insurance Arena, even as a visiting player.

“I’ll miss everything about Portland to be honest,” said Dan O’Donoghue, a forward who played 19 games for the Pirates from 2013-15. “It was a great place to live for the season while we were playing there, and the people were fabulous.”

When the Arizona Coyotes decided to end their affiliation with the Pirates after the 2014-15 season, Portland became the new home for the AHL team of the Florida Panthers, a change which forced O’Donoghue, who was under contract with the Coyotes at the time, to relocate and switch sweaters to the (now former) Springfield Falcons. Being in the same division as the Pirates, O’Donoghue still had the chance to visit Portland last season.

“It was one of the best minor league hockey cities out there in terms of things to do, such as nightlife, restaurants, and scenery,” continued O’Donoghue, who will start the 2016-17 season with the Wheeling Nailers, the East Coast Hockey League affiliate of the Pittsburgh Penguins. “It’s a shame the fans won’t have a team to cheer for this upcoming season, but it’s a business, and that’s just how it goes sometimes. Hopefully a team will be back in Portland soon.

O’Donoghue’s former teammate, Joel Hanley, also shared similar sentiments about what he’ll miss most about playing in Portland this season.

Bolduc says “hey” to youth hockey players during warmups back in the 2014-15 season. (Photo by Nicole Sorce)

“The fan base and the city!!” responded Hanley, who also played for the Pirates from 2013-2015. The forward is currently under a two-way contract with the Montreal Canadiens and their AHL affiliate, St. John’s IceCaps.

Alex Bolduc, popular captain of the 2014-15 Pirates, would agree with his former teammates as well.

“I really enjoyed my time in Portland. We had some good teams while I was there and played in some special games,” said Bolduc, who is currently playing center in the Kontinental Hockey League for Croatia’s Zagreb Medveščak. “I’ll miss the atmosphere that the fans gave us during those times.”

And as for former goalie coach Alfie Michaud, the thought of not enjoying professional hockey at the Cross Insurance Arena this season just doesn’t feel right.

“I’ll miss conversing with the other coaches and my goalies, of course,” said Michaud, who worked with the Pirates during the 2014-15 season. “Really, I miss it all – every single second that goes into it. The action, the players, the nerves of whether we are ready, and the excitement when the guys are executing and doing what we worked on.

Michaud once had to make an emergency appearance as backup goalie during an early season game against the Providence Bruins in 2014. (Photo by Nicole Sorce)

Working with his athletes, however, is only a part of what Michaud, a former goalie for the University of Maine, already misses about Portland’s former pro team.

“I’ll miss the people. Even though I was in the stands working and watching the game, I always snuck a peek and people watched. It’s amazing how hockey brings people together,” Michaud continued. “To see the kids excited and the parents seeing them having fun is humbling. I’ve been really lucky to have played and now coach and be a part of that stuff.”

Francis Wathier, another former Pirates player from the 2014-15 season, understands Michaud’s thoughts completely. For the Wathier and his family, Portland was truly the definition of what hockey is all about.

“The things I’m missing most about Portland is the passion that the fans had for the game. It was always exciting to play in front of them every night,” said Wathier, a recently-retired left wing who tallied 14 points during his Pirates career. “On a personal note, me and my family really miss the unique restaurant experience in the city. The food was amazing!!!”

While these former players and coaches have moved on to new teams and cities, there is still one thing everyone can agree on.

“Hopefully Portland can find a way to get a team back,” said Michaud. “It really is one of the best cities in minor pro.” 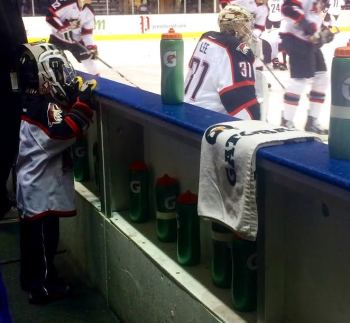 A young Pirates fan watches his hometown heroes warm up from the bench in 2015. (Photo by Nicole Sorce)