One of the best nights of my career was Opening Night of the 2014-15 American Hockey League season in Portland, Maine. (Photo: Nicole Sorce)

PORTLAND, MAINE – It was on May 4, 2016, that thousands of loyal American Hockey League fans in Portland, Maine, lost their beloved Portland Pirates when the team was abruptly sold and relocated to Springfield, Massachusetts, leaving the Cross Insurance Arena empty for the foreseeable future.

When the news broke, former Pirates Chief Operating Officer, Brad Church, and others began to scramble, looking for investors that would be willing to assist in bringing a new East Coast Hockey League (ECHL) franchise to Portland. Now, after several months with no luck, chances that the city will land an ECHL team for the 2017-18 season is looking less and less likely. 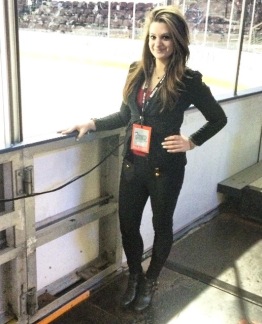 The Cross Insurance Arena, the city of Portland, and the state of Maine will always hold a special place in my heart. (Photo by Erica Brochu)

The unfortunate demise Pirates circles back to the organization’s internal financial struggles, which seemed to become drastically worse after the completion of renovations to the Cross Insurance Arena, a project worth $33 million, according to the city.

Following the arena’s renovations completed in 2014, the Pirates and other building occupants were forced to raise ticket prices in order to pay back the bond for the renovations. In fact, $1 from every Pirates ticket sold from May 2014 on went directly towards the paying off the bond.

However, it wasn’t the single dollar from every ticket going towards the bond that influenced fans to stop buying and forced Ron Cain to sell the Pirates. Actually, the team hadn’t made a profit in several seasons. According to Glenn Jordan of the Portland Press Herald, Cain said that the team needed to sell 4,000 tickets per game to break even. In reality, the ticket sales staff struggled to achieve a nightly average attendance of even during the 2014-15 season, which immediately followed the arena’s renovations.

Formerly known as “The Civic Center,” the building, according to city, “is an important community asset” and had to “be accommodated and integrated within the surrounding neighborhood through careful design and engineering” during the renovations. While the additions of new luxury seating areas and appeal of a redone arena gave the Pirates hope for an increase in sales, most casual fans, especially families with children, thought the average ticket price of $16.30 was plainly too high. 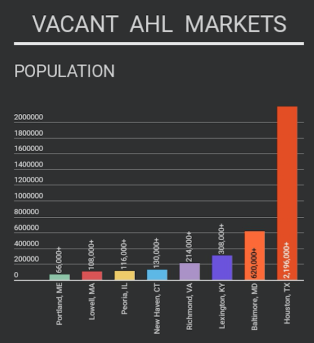 Here’s a look at just a few of the cities in the U.S. that no longer house American Hockey League franchises. (Chart made with Infogr.am)

With the ECHL’s deadline to consider new proposals for expansion teams and relocations approaching in January, all hockey fans in Maine can do now is hold out hope that an ECHL franchise will be possible for the 2018-19 season. However, there are handfuls of abandoned AHL cities across the United States and Canada also hoping for the same.

Since the AHL was founded in 1936, countless teams in cities from coast to coast have folded or have been relocated for similar reasons Pirates ownership experienced. In fact, there are a handful of vacant markets in the U.S. alone with populations far larger than that of Portland and its surrounding communities, including Baltimore, Md., Lexington, Ky., and Houston, Tx.

With Worcester, Massachusetts, being awarded an ECHL team that will begin play next season after losing their AHL franchise in 2015, it is implied that the situation in Portland is not top of mind in terms of which arena will be filled next. Unfortunately for Mainers, their city may have to wait in line to get their chance at cheering on another professional franchise at the Cross Insurance Arena.