UTICA, N.Y. – The American Hockey League’s all-star break is rapidly approaching, which means it’s the unofficial time for fans to begin worrying about their team’s chances to make the Calder Cup Playoffs this spring.

The Utica Comets, top affiliate of the National Hockey League’s Vancouver Canucks, struggled to get going this fall and fell to the bottom of the standings, both in the Northern Division and Eastern Conference, after a string of heartbreaking outcomes which included five overtime/shootout losses in December.

Recently, however, the squad snapped a nine-game losing streak and gained back some ground by winning five of their last six contests, bumping them up to 10th place in the Eastern Conference. In terms of the Northern Division, the Comets now stand in fourth place, just seven points behind third-place St. John’s IceCaps. 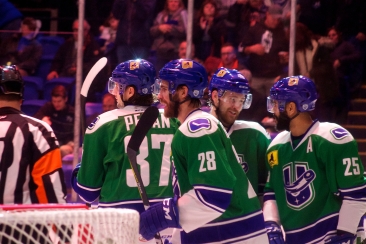 Alexandre Grenier (28) celebrates with his teammates their first win in 10 games on January 11 at the Utica Memorial Auditorium. (Photo by Nicole Sorce)

Austin Fontanella, Sports Director for WUTR-TV in Utica, remains optimistic that the Comets can rebound and claim (at least) the eighth-place spot in the Eastern Conference by the end of the season to secure the team’s third playoff bid in four seasons.

“They still have a chance, but if they want to stay in it, they need to do well at the end of January,” said Fontanella, who has been covering the team since the beginning of the 2014-15 season, the season the Comets fell in the Calder Cup Finals to the Manchester Monarchs.

The Comets just hit the road for a crucial five-game road trip that, according to Fontanella, could decide the rest of their season.

“If they don’t take at least three or four, since they’re all against teams in the Eastern Conference, they’re not going to do well going forward,” he explained.

Now, as the season heads into the second half, the Comets and the rest of the AHL are looking forward to a break for the league’s annual All-Star Classic, which will be hosted by the Lehigh Valley Phantoms in Allentown, P.A., on January 29 and 30. 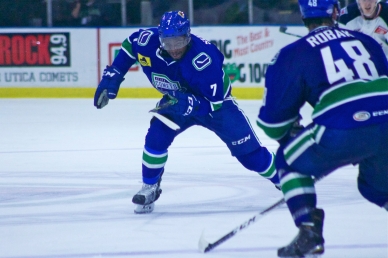 Utica defenseman Jordan Subban, who is only in his second pro season, earned his first all-star roster spot and will be representing the Comets at the two-day event later this month. While Subban leads the team with six power-play goals on the season, Fontanella debates whether Subban was the right choice.

“(Head Coach) Travis Greene will tell you himself, his numbers are great, but there’s a lot he still needs to work on, like his defense,” explained Fontanella.

When the Comets return from their road trip, they will host three straight games against the Springfield Thunderbirds, Wilkes-Barre/Scranton Penguins, and Syracuse Crunch before their needed break for the AHL All-Star Classic. They will then return to action on February 3 in Hartford.