OTTAWA, ON, CAN – Itʼs hard to fathom that itʼs only been two years since I traveled to Ottawa for the first time, the hockey town thatʼs had such an influence on my career. In fact, it was the first time I had ever even left the United States.

It was my first time crossing the border into Canada. Of course I took a picture of it. (Photo by Nicole Sorce)

On a gorgeous, almost-fall day in September 2017, I headed north on I-81 beyond Syracuse, the farthest north I had ever driven — maybe with Portland, Maine, being the exception. “CANADA – 25,” a road sign eventually warned me. I had been dreaming of doing this since my days with the former American Hockey League team, the Binghamton Senators.

When I pulled up to the border agentʼs booth, he greeted me with a “Hello! Bonjour!” Oh my, I thought, I love this country already. “Where are you from? Where are you headed? Is this for work or pleasure? How long are you staying? Do you have any weapons, tobacco, or anything you shouldnʼt have?” he asked.

“Ithaca, New York. The Ottawa Senators arena, Canadian Tire Centre. Technically work and pleasure — I am a hockey photographer with a blog who just wants to see and photograph the arena. Just for the day. No, no, and no,” I responded.

He handed my license back to me and told me to enjoy my trip. “Go Senators!” he added.

Then it hit me — my cell service no longer worked, MPH was no longer a thing, and Oh, Canada, I FINALLY MADE IT!! And I was almost at Canadian Tire Centre, a moment years in the making.

Iʼll never forget my first look. The sun was shining as I pulled up around 2:00 in the afternoon. I was blown away by the sight of the first Canadian hockey arena Iʼve ever seen — let alone an NHL rink I had dreamed of experiencing since I was still in college.

One of my immediate observations was its location, tucked away from bustling downtown Ottawa. It was such an easy drive to get to and right off the highway. And with plenty of parking and bus stops everywhere, it was confusing to me that such an accessible arena didnʼt have more sell out crowds.

There were a lot of familiar faces up there from the Binghamton Senators in 2017. (Photo by Nicole Sorce)

I parked in the lot behind the arena, finding a shady spot that offered a great view of the building. I got out of the car with my camera and started on the hike of a lifetime, exploring everything I could and savoring every moment on my camera roll.

I finished my lap around the arena and finally came to the main entrance of the building. Its facade showed off photos of Ottawa Senators players in a majestic display, and although I was the only person around, the arena radiated a powerful energy that felt as if I was standing in the middle of a packed crowd on Opening Night. It was honestly the most perfect day trip I have ever had.

Just Getting Warmed Up

It was later in 2017 when I began covering the Belleville Senators, which replaced the Binghamton Senators as Ottawa’s AHL affiliate. Seeing the support for the Sens’ organization in its new AHL home and being granted media access to cover bits and pieces of their inaugural season brought me — and still brings me — joy I cannot describe. 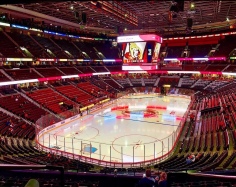 Probably one of the most beautiful sights I have ever seen. (Photo by Nicole Sorce)

The next September (2018), I checked another item off my hockey bucket list — my first long weekend in Ottawa and my first ever Ottawa Senators game. If I thought I fell in love with Ottawa the first time, nothing couldʼve prepared me for how much deeper my fondness would grow for this city and team. And I couldn’t have cared less that it was still preseason — it was Ottawa Senators hockey, and it was awesome.

I took in warmups from the glass and saw a few familiar faces, including recently retired goalie Mike McKenna. He was in Binghamton when my career started, as well as Portland during my time with the Pirates. And he was a leading force of the 2017 Calder Cup run I covered with the Syracuse Crunch. I felt that in that moment, Ottawa became my second home.

And before the night was over, I made a discovery that is either 100% coincidence or 100% fate. The Sensʼ beloved mascot is named Spartacat. SPARTA. CAT. Why does that even matter? Sparta, New Jersey, is my hometown. And I have a cat. “How on earth is Spartacat named SPARTACAT?! Is this a sign?!?!” I exclaimed to my best friend, Amy, who was on the trip with me.

I took it as a sign. I continued to cover the Belleville Senators and dreamt of a way to get involved in Ottawa.

Opportunity of a Lifetime

I could literally stare at this place all day. (Photo by Nicole Sorce)

Thatʼs when my hockey life really changed for the better. During Playoffs 2019, I noticed that the Ottawa Senators Foundation had been following me on Twitter. I instantly followed back and sent a DM to find out if there was any way at all I could get involved.

After some initial talks with Brad Weir, Director of Communications and Community Programs, I officially became a Sens Foundation volunteer. And the capacity in which I am doing so is a role I feel like Iʼve been preparing for my entire career. Aside from volunteering for some of its events, I will be collaborating with Weir all season long to create a blog on the Foundationʼs website. Iʼll be authoring a series of articles that cover the amazing impact its programs have on the youth of the community.

Over the years, Iʼve witnessed firsthand the influential effects the game of hockey can have on a city and community — especially when it comes to children and teens. From the juniors to the AHL to leagues around the world, the players that spend their seasons in these cities become local heroes and have such a positive impact on countless families who support the team.

Is it October yet?! (Photo by Amy Spivey)

That is even more true when it comes to the greatest league in the world. The impact NHL teams alone have on their communities is astonishing enough. Just imagine the impact NHL foundations can make, as well. In Ottawa, giving underprivileged youth the opportunity to interact with Senators players and participate in these programs is something that yields benefits astronomical in nature, to say the least.

Weʼre roughly just a month away from Senators Opening Night in Ottawa, and as you can imagine, this is the most excited Iʼve ever been to start a new hockey season — ever. I canʼt wait to witness the impacts the Sens Foundation is having on Ottawa and the surrounding areas, and then bring those stories to you on a regular basis.

Through our work, youʼll be hearing from Senators players and personnel, volunteers, and above all, the children and families who the Foundation is impacting the most. Be sure to stay tuned to www.sensfoundation.com for the latest articles, as well as www.nicolesorce.com for my take on the entire experience. And if you’re able, please consider donating to the Ottawa Senators Foundation. See you all from Ottawa soon! #GoSensGo